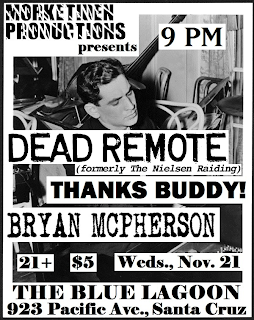 It ain't easy being a three piece in a world of music that is processed and overdone so we bring what is real back to a punk rock trio. Oh, and we will bring it.
We are three guys hailing from Santa Cruz, California. Have you heard of it, dudes? We brought you The Lost Boys...that's right...The Lost Boys. Whatchu got? S.C. also has a lineage of punk rock and the three of us are glad to put it back on the map.

"Bryan McPherson was born and raised in Dorchester, MA, an Irish-Catholic neighborhood of Boston known for its tough demeanor and sometimes narrow world view.  He grew up exploring music through Boston's punk rock scene, which often reflected the values fostered by his hometown.  When it came time to pursue music of his own, however, Bryan found his own road to walk.  While his friends bought second-hand half stacks, he got an acoustic guitar.  Dorchester's Street Dogs and Pug Uglies often sing about the trials of growing up in that neighborhood.  Bryan's lyrics also reflect his upbringing, but from a broader perspective as he explores his place in this world and the struggles of the human race.  Bryan's road brought him to folk music: the music of the people.
On Bryan McPherson’s second album, he finds himself in California continuing the story that started in Boston. In American Boy American Girl, Bryan explores the dark underbelly of the American dream.  From factories to farmlands, riots to prisons, mountains to dark city streets, Bryan explores this narrative and spits rage in the face of those who oppress, those who would have us be afraid, those who control for their own selfish means.  He paints humanity as one group, with "no creed, no class, no nation."  The songwriting reveals his punk rock foundation through a lens shaped by Dylan and Guthrie.  American Boy American Girl displays Bryan's range and talent, and hints at a future of limitless potential. Bryan McPherson's songs are protest music at its best.  He rails against injustice and inequality, and government in any form that would make subjects of its citizens.  Fittingly, American Boy American Girl will be released on April 17, 2012: tax day."
- State Line Records

• Bryan McPherson was a major supporter of the "Occupy" movement. He performed at the protest
encampments for free alongside Amanda Palmer, Michael Moore, NoFX and Anti-Flag.
• Bryan toured with the Dropkick Murphys and did a week-long residency as a part of their  St. Patrick’s Day celebration in Boston where he played to an estimated 24,000 people.
• Bryan played a pivotal role in the New York City "Anti-Folk" movement.
• Bryan had the rare opportunity to open up and perform for Rock and Roll Legend, Chuck Berry.
• Bryan's reach continues to grow; he recently returned from London where he performed a one-off show in
front of a capacity audience.

RSVP ON FACEBOOK
Posted by Unknown at 2:16 PM No comments: 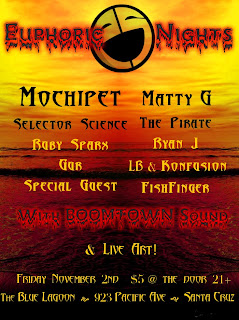 Here it is folks, get ready for round two of Euphoric Nights!!! We're really pumped to keep these monthly's rolling along, and we're especially excited because this event is so close to HHAALLLLOOOWWEEENNN!!! So put on some sexual and/or freaky costumes... as they say: "Dress to undress!" or something like that :).

For this second addition of Euphoric Nights, we have a very special crew coming in to collaborate with us. We are pleased to announce that The SC Dubstep fam will be in the house, and they will be getting extra rambunctious for the celebration of SC Dubstep's Anniversary!!! (we're not sure what edition, just count the years since the aliens landed)

Euphoric teamed with up these guys and took special care to make sure this lineup would blow the roof off the place, whisper sweet Bassings into your ear, and keep the dance floor alive with a nonstop undulating sea of beautiful friends and strangers alike. I can't fuckin wait!

See you there my friends...

Also, with the Infamous BOOMTOWN SOUND
&
we'll be featuring some of SC's finest local LIVE Artists as well!!

RSVP ON FACEBOOK
Posted by Unknown at 3:29 AM No comments: 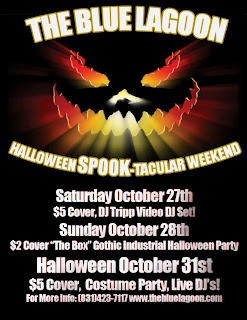