In Times Of Triage III - Urgence Médico-Psychologique: THE BACK UP RAZOR NEW ALBUM OUT AUGUST 15th 2011 on ITCHY METAL ENTERTAINMENT 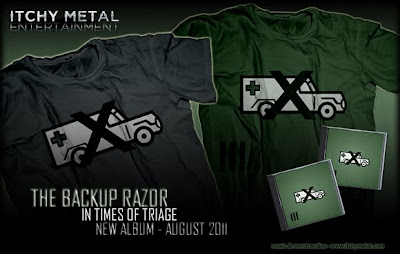 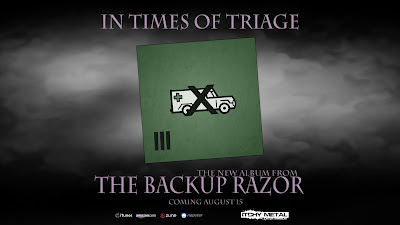 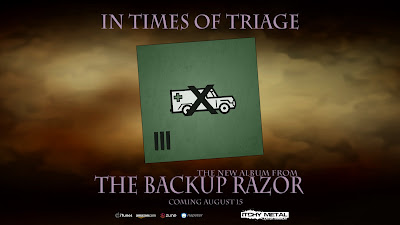 IME’s NorCal Punkers “THE BACKUP RAZOR” prepare for their much awaited full album release entitled “IN TIMES OF TRIAGE” due out August 15th. Available at all digital retailers world-wide and on the official IME Merch Store. Check ‘em out today!
As the latest Punk addition to Itchy Metal, rebel quartet "The Backup Razor" is an established entity on the Santa Cruz music scene, both as a member of the artist community and driver of the scene...

With many groups including The Avengers, The Nuns, Mutants, The Offs, and the Dead Kennedys having built thriving careers out of northern California, the Bay Area is no stranger to Punk Rock. Abundant in arts and culture, it makes sense that local geography continues to birth an unstoppable, underground movement abundant in Punk.
Included in the mix is Santa Cruz’s “The Backup Razor”, an eclectic group fueled by a love for “what they do” and propelled by a mission to keep the local music scene alive. Front-man Jesse Williams is the voice behind the band, supported by Nick Hardesty on guitar, David Montanari on drums and Jeff Badagliacca on bass.
Driven by a genuine passion for expression, TBR has a resume that would put some of the most tenured bands to shame. Sharing stage with literally hundreds of artists and myriads of venues, the rebel quartet has become an established entity across the region as a member and driver on the local scene.
“If you’re trying to make an impact, it’s not enough to make music and hope that something is going to happen,” states Ed Fassio, founder and President of Itchy Metal Entertainment – a Los Angeles-based indie music label who knows a thing or two about staying active. “Live performance is one part of it, but equally important are your community affairs and industry associations. The Backup Razor is a prime example of true involvement. IME is as much concerned with finding great music as we are at finding great people that perpetuate the movement. In TBR, we’re very fortunate to have found both.”

Fassio was introduced to The Backup Razor through Gruesom Grimp, a fellow Bay Area musician and manager of Itchy Metal Artist, A Band of Orcs. Always keeping an eye out for great additions to the growing label’s artist and partner community, Grimp spoke highly of the band’s showmanship and contributions on the local scene. Shortly after, he provided links to their material which sparked both interest and curiosity.
Regarding TBR’s vocalist (Jesse Williams), Grimp adds, “I always call him one of the hardest working guys in Santa Cruz. [As a partner in music] he’s one of the best we’ve had.”
Itchy Metal’s rapid expansion is due in-part to a strong community of artists bonded by a love for music, appreciation of art and dedication to make a difference. It was natural that both IME and TBR culture would be instantly compatible. “There is a perfect combination of elements at work here,” adds Fassio. “Along with great music, we’ve found a very strong music activist and keen business group. That’s a great foundation for future success.”
The Backup Razor plans multiple projects with Itchy Metal which include some well strategized release plans, promotion and performance opportunities. Fans can expect great, original things from this new combination.
ITCHY METAL ENTERTAINMENT
Itchy Metal Entertainment is a Las Vegas, NV - based music production company, specializing in artist dev, talent scouting, music recording, producing and distribution as well as internet marketing campaigns and strategies. Visit www.itchymetal.com

Purchase On Amazon.com
Posted by Unknown at 5:44 PM No comments: 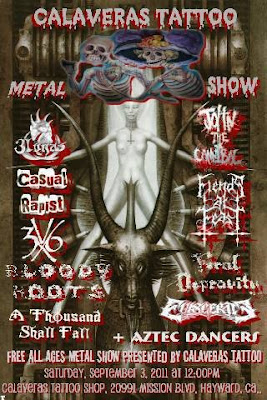 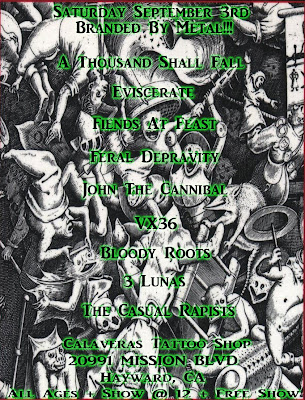 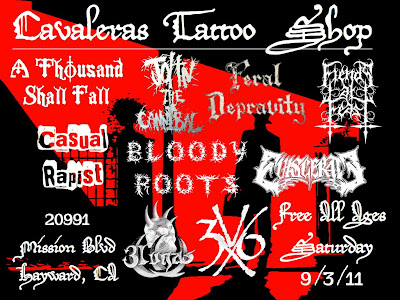 Saturday September 3rd 2011
A Thousand Shall Fall
Emerging as a duo in the Summer of 2010 with the musical engineering prowess of Kevin Loftus and the guitar styling's of Dhruva Noel, A Thousand Shall Fall was a metal-based recording group with hopes of gaining a few more members and turning it into the real thing. In late August the duo became a formidable trio with the addition of Daniel Johnston, a highly skilled guitarist previously part of various local bands such as Descending Forth and others. With the addition of Dan A.T.S.F. found a direction for their music and added an important piece to their onslaught. In late 2010 Jesse Williams joined on vocals, and in early 2011 Gena Krupa joined the band to finalize the A.T.S.F. lineup. Currently in the process of composing, booking, and recording the band's sound is strongly melodic while simultaneously staying true to the heavy hitting rhythms they've all grown fond of. Keep your eyes and ears open for some upcoming tracks on Myspace other sites and look out for A Thousand Shall Fall coming to a city near you in Summer 2011.
John The Cannibal
Ready to destroy

Feral Depravity
Born in the summer of 2007, out of a shared hatred of mankind and thirst to find humor in it all. Three dudes looking to highlight the darkest and more hilarious endevours of the human race.

Spewing possessed ballads of darkness and evil, local blackened death metal act Fiends at Feast aim to slay all evangelical mongrels who oppose them in their quest for dominance and extreme metal glory.

The local Santa Cruz archfiends are arguably the darkest and heaviest force within the region, and by foraging a wicked synthesis of black and death metal, the sinful 5-man outfit winds their sonic mayhem into superbly vile sound that is relatively unheard of within the local music scene. Unfortunately, the fiends are a big fish in a small pond, but they are striving to expand their listener base beyond the confinement of Santa Cruz County.

The evocative harmonies produced by the leather adorned heathens induce visions of brutal Viking warfare and primal feelings of rage and disharmony. Once surging through your veins, the viciousness of Fiends at Feast will unceremoniously devour your soul and leave you begging for more.

“We are obviously on the outer realm of music; very esoteric and cryptic. Musically, I like to combine very dark, haunting melodies with the heaviness and brutality of more stapled death metal, but also draw things in from black metal as well” explains guitarist Azazel. “Fiends at Feast has come out with new blueprint of music combined with all the tastes of the band” says Loki, vocals. “One word… Extreme” articulates guitarist Sammer `The Barbarian’.

Fiends at Feast incorporates demonic visuals matched by poignant melodies, racing tempos, grisly vocals, cruelly complex bass lines, and crushing guitars. The fiends find a signature sound by incorporating elements from black metal such as tremolo picking and depressing melodies with aspects from death metal such as heavy riffage and blast beats. The blasphemous head-bangers further break the boundaries of extreme metal by adding experimental phases throughout their impious tracks.

The band was founded by guitarists Sammer `The Barbarian’ and Azazel out of The Barbarian’s bedroom in 2008. Bassist Nathan Nunes and vocalist Loki joined weeks after band had begun writing original material. After two previous drummers had left the band, the fiends met up with their new drummer Trevor, a.k.a. Marloc, in September of this year, thus completing the current lineup.

The blackened hearts of Fiends at Feast often remain stagnant, but the fury of extreme metal ignites a flame of passion and a burning dedication within their callous souls. “Metal is a very powerful form of music, and I feel that if you view music in a purely expressive way, metal more accurately reflects the world around us than say, pop music… the world is not a happy place; there is war, hate, and anger all the time” says Azazel.

“Metal has everything I like about music. It’s aggressive but it also incorporates so many different styles of music; listen to bands like Obscura and you can hear lots of jazz influence. Brutality is great, but the level of creativity in metal is as high as you can take it” says Nunes.

“Playing metal allows me to express myself with no boundaries; I can express hate, love and just be myself. I’m metal to the bone, I was born with the virus of metal and I will die that way” reflects Loki.

The aggressive music disgorged from the bowels of the underworld and resurrected by Fiends at Feast surfaces only from dedication and hard work. It’s no surprise that extreme metal is under appreciated and difficult to play, but for the fiends metal is a way of life. Through dedication and commitment the baneful specters will spread the metal virus throughout Santa Cruz and beyond.
VX36
Emerging onto the metal scene in 2004 as a 3-piece, VX36 started growing a fan base and recognition from all. With crushing tunes and powerful lyrics they stand at the doorstep of magnitude. Through the hardships and good times it seems the band keeps growing stronger even with the changing of members in 2008. Staying together as a 2-piece they have the heart, drive, and dedication to take over the scene and become one of Metal's hardest working bands with their DIY attitude and drive they stand to become a staple in the music community. Like many bands before, VX36 has the work-ethic, musical instincts and determination. Come to a show and say no more! Rock ON!!!
Calaveras Tattoo Shop
20991 Mission Blvd, Hayward, CA
Posted by Unknown at 5:40 PM No comments: 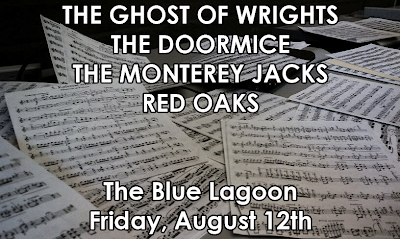 Friday, August 12th 2011
THE GHOST OF WRIGHTS
Santa Cruz Mountains, CA
Folk/Rock/Experimental
In the 1880’s a railroad was completed that traversed the Santa Cruz Mountains. This was accomplished with the construction of a small number of tunnels that connected the small towns and communities that dotted the countryside between the Santa Clara Valley and Santa Cruz. One of these communities was the train depot of Wrights Station.
The railroad was shut down in the 1940’s with the entrances to the tunnels blown up. As a result these small communities dwindled and disappeared becoming ghost towns. Although little remains today but crumbling stone and overgrown foundations, the souls of these towns and tunnels linger on to this day… We are The Ghost of Wrights.
THE DOORMICE
San Jose
Jazz/Folk/Swing/Psychedelic/Blues/Ragtime
We are mice. We are friends. And we are on an adventure. To fill empty space with our songs. Help us? listen? like dis-like. whichever you prefer. we dont care either way. just fucking pick one.
THE MONTEREY JACKS
The Bay Area
Rock/Psychedelic/Indie
Yes, we're a Bay Area band that consists of Guitar (Eliot Chamberlain) Drums (Daniel Michaelsen) and our bassist (Greg Samuels). Eliot Chamberlain also plays the banjo, piano, and bass. Daniel doesn't play the harmonica. We have music for sale at iTunes, Amazon, CD Baby, Napster, the Streetlight records in San Jose, CA..etc.
P.s... Monterey Jacks stickers are all over the place. Keep an eye out in places such as stop signs on Leigh Avenue by Leigh High School, CA, and remote rest stops in the middle of open arizona desert. If you find one, send us a picture. And we will send you a prize. Good luck.
RED OAKS
san jose, ca
indie rock
THE BLUE LAGOON
923 PACIFIC AVE
SANTA CRUZ, CA 95060
DOORS 8:00
SHOW 9:00
RSVP ON FACEBOOK
Posted by Unknown at 4:34 PM No comments: