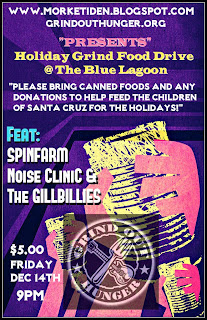 Please come out to the Grind Out Hunger-Holiday Food Drive at the Blue Lagoon Fri. Dec 14th and donate some canned foods and/or donate some coin to the children of Santa Cruz Cnty. So they can have a meal for the holidays. PLUS you get some really killer music too! :)

Monterey bay area band Spinfarm harvests their original home grown sound from their own local Star Studios, fresh to your ears. This trio of dedicated audio ranchers is composed of well known and long time local Salinas based musicians Adam Stafford on drums and vocals, Brendon Ghiringhelli on the bass guitar, and the anonymous Mr X, who drifted into Central California on a southwest high desert wind, playing guitar, synthesizers, and backing vocals. Their eclectic and uniquely inspired music is infused with tastes of nostalgia, psychedelia, and classic and modern flavors of rock that satisfies the hunger of all ages. Year after year, Spinfarm continues to locally grow sounds for your head with Monterey County Pride, and no GMO’s."

Originally started in Tokyo, Japan, in September of 2006 with Taito, Tabata, Mitsuru and Kawakita, Ayato to much critical acclaim, played many shows in Japan and recorded with the legendary Charlie in Tokyo to make the remarkable unreleased album, 'Mona Lisa has John Coltrane eyes'. Taito is the mastermind behind the old school West Coast, USA noise-rock band Junk Sick Dawn and also plays guitar for Power Strip and Sayaka Starlite (in Santa Cruz, Ca. USA), Oh My Cow! (Kyoto, Japan) and +DOG+ (L.A., California). Tabata is a founder member of The Boredoms and is active in many projects including Zeni Geva, Acid Mother's Temple and Amazon Saliva. Ayato is an incredible engineer and also plays with the Ayato Kawakita Project jazz group.
Taito Reed re-formed Noise Clinic in Santa Cruz, Ca, USA in 2009 after an abrupt and unintentional departure from Japan in 2008. Teamed up with international recording artist Sayaka Yabuki (Sayaka Starlite, Black Cab, Zen Paradox, Memory Geist) and pioneering loop artist and percussionist Rick Walker (Tao Chemical, Lackadaisy, Done Beginner), the trio set out on a flurry of gigs through the SF Bay Area. This led to the induction of Joe Gabent (Exploding Crustaceans, The Gibbs, SA90, The History Lesson) on bass. More songs were added to the set, and drummer Rick exited and Trevor McClain (Fiends at Feast) was brought in and now rounds out the group. Busily writing new material and resurrecting songs from the Japan Noise Clinic's finished but never released album to add to the live show, Noise Clinic is gearing up for a very busy 2011. James feathers, of original Junk Sick Dawn fame, is along doing an insane array of organic light projection known as the Hikari Saru (Bright Monkey) an almost scary primordial acid flash back they keep promising us. With an enormous sonic attack, textural freakouts, hard rock meets noise meets metal, introspective and often dark subjects and taboo tones, sci-fi psychedelia punk rock grindcore and explosive live shows, Noise Clinic is ready to spark the fuse of a Rock and Roll noise revolution.
Check out the Noise Clinic channel on YouTube!

On Dec. 14, the Santa Cruz community will have a chance to give to children in need. Organized by Grind Out Hunger, the Holiday Grind Food Drive will take place at The Blue Lagoon at 9 p.m., where attendees can enjoy live music and make donations of canned food and money to help local children.
Since its inception in 2003, the organization’s Holiday Grind Food Drive has collected one million pounds of food through community fundraisers to fight the plight of poverty.
Grind Out Hunger empowers youths by appealing to their passion in surfing, skateboarding, snowboarding and music in order to fight against childhood hunger and malnutrition. Danny Keith, who founded the organization in 2003, said they use action sports and music to teach kids about advocacy, community and purpose. The organization reaches out to youths involved in action sports or who have faced hunger themselves through events such as “skate jams” and benefit concerts.
“The kids are what really drives Grind Out Hunger and their passion and dedication to the community,” Keith said. “Together they’ve raised almost two million meals for the community of Santa Cruz County.”
Keith, who owns the Santa Cruz Skate and Surf Shop, founded the organization when the Second Harvest Food Bank set up a barrel for donations in front of his shop. Forty-five percent of Second Harvest’s clients are children, and Keith was shocked to find out that children in the Santa Cruz County were hungry and malnourished. He began going to schools to raise awareness among children.
“Our mission statement is to empower the youth by utilizing the passion of skateboarding, surfing, snowboarding and music to take leadership in the fight against childhood hunger and malnutrition,” he said.
Spinfarm, a local Salinas band, will be one of three bands performing at the upcoming event. This is the band’s fourth time performing for a Grind Out Hunger show, which take place more than once a year.
Spinfarm has been playing at local Santa Cruz venues like The Catalyst and The Blue Lagoon for the two years they have been together. The band’s lead singer and drummer Adam Stafford contacted Keith, made arrangements and promoted the Blue Lagoon show as a Grind Out Hunger event.
“I have an interest in [the cause] just because of being a parent,” Stafford said.
Stafford, who has lived in Santa Cruz for 20 years, said in between working as a purchaser/bulk commodities buyer at Sunridge Farms and being a parent, he now plays in the band for fun.
“I’m still young at heart, and I’m going to keep playing,” he said. “I believe in this cause too. I feel like it’s a really good cause.”
Stafford said they call the band’s genre of music lo-fi desert rock, but it can also be classified as hard rock. Two other bands, Noise Clinic and The Gillbillies, will also be performing at The Holiday Grind Food Drive.
Grind Out Hunger raises awareness by selling merchandise such as wristbands, t-shirts and stickers. This merchandise will be on sale at The Holiday Grind Food Drive. Grind Out Hunger works with Second Harvest Food Bank to ensure these proceeds will go to feeding hungry children in Santa Cruz.
“We’re kind of layering in giving back and paying attention to people,” Stafford said.

For more information on Grind Out Hunger and Blue Lagoon events, go to www.grindouthunger.org and www.thebluelagoon.com.
Posted by Unknown at 5:57 PM No comments: 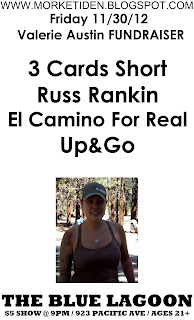 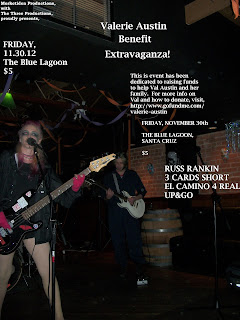 Our friend Valerie Austin was hit by an SUV and dragged 50 feet while riding her bike in Santa Cruz on Wednesday, November 7th. She broke her spine and ankle, and lost a lot of blood. She's had several surgeries to repair her vertebrae. Thankfully she is slowly recovering!

We are asking for donations from friends and the community toward Val's medical bills and her family's travel expenses. Anything helps.

Thank you!! And please spread the word and share the link!!

Proceeds will be donated toward Val's medical bills and her family's travel expenses.
Donations can be made to http://www.gofundme.com/valerie-austin. Thank you!! ♥


3 Cards Short, NERD CORE AMBASSADORs of Santa Cruz, cordially invites you to a night of music and community with:

3 Cards Short
Trans-Atlantic Nerd Core Core-Core....KOR (i thought i coined this "genre" but then my 13 yo showed me mc chris [like, 4 months ago] and that fucker had been using it already! FUCK that guy!!♥)
Santa Cruz

We are 3/4 American and 1/4 British. WINNING.
A culmination of stagnant House-Wifery and Clandestine Lethargy, the Nerd Age is re-written, Punk Rock Style. Female vocals unlike any in the punk genre to-date, combined with musical composition beyond the skill of your average new-comer, create the gurl-fronted band you always wanted to hear.
3 Cards Short is Santa Cruz's first Trans-Atlantic Nerd-Core endeavor. Created by Brown-Noise Master Doppelganger twins in secret, underground British bunkers, and presented to you by the best friends and players money can't buy, 3 Cards Short in intent on making you poop in your pants. We're totally cereal. Pwn.


Russ Rankin is the lead vocalist for melodic hardcore band Only Crime, Creep Division and former punk rock band Good Riddance. Both bands were signed to Fat Wreck Chords until Good Riddance announced their breakup on April 3, 2007 . Rankin was also a member of Fury 66 and State of Grace. He has also lent his voice to songs by Rise Against, Ensign, Comeback Kid. Additionally, Rankin spends time producing bands. Most recently, he performed a cover of the Johnny Cash song "Walk the Line" for a punk rock tribute album entitled All Aboard: A Tribute to Johnny Cash. Rankin appeared in the independent documentary, Meditate and Destroy, that focuses on Dharma Punx author Noah Levine. Along with his band Good Riddance, they can be seen in the film performing at the Catalyst club in Santa Cruz, CA.

Rankin is a member of PETA and leads a straight edge and vegan lifestyle. Rankin holds the position of California/Western United States Regional Scout for the Kootenay Ice, a hockey team that competes in the Western Hockey League.
Accourding to author Noah Levine, Rankin "spends most of his time these days touring internationally and spreading political and spiritual awareness through his lyrics."
He is also a regular contributor to Amp Magazine, where he has his own column.

With previous experience in bands, the members of Up&Go managed to form a steady and solid sound of Alternative Pop Punk for your listening pleasure.
Up&Go is a Bay Area rock band from San Jose CA.
For those who enjoy bands like: Alkaline Trio, Four Year Strong and Midtown

RSVP ON FACEBOOK
Posted by Unknown at 2:24 PM No comments: 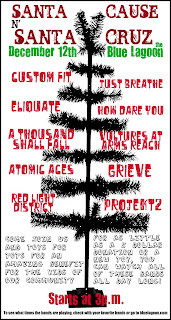 Come join us and Toys For Tots Wednesday December 12th at the Blue Lagoon for this special event.
10 Local bands all day, starting at 3 p.m. Entry for the entire day requires either a 5 dollar donation, or a new packaged toy. This event was organized by members VAAR, ATSF, & Just Breathe. Support musicians who support our community. The roster is as follows...

RSVP ON FACEBOOK
Posted by Unknown at 3:35 PM No comments: 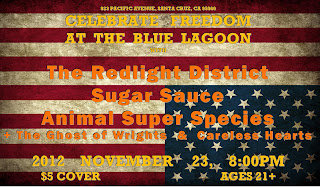 Enjoy a drink at the Blue Lagoon with these ridiculous bands!!!

The Ghost of Wrights

RSVP ON FACEBOOK
Posted by Unknown at 3:00 PM No comments: